We're getting another one!? Twintails volume 20 is out! 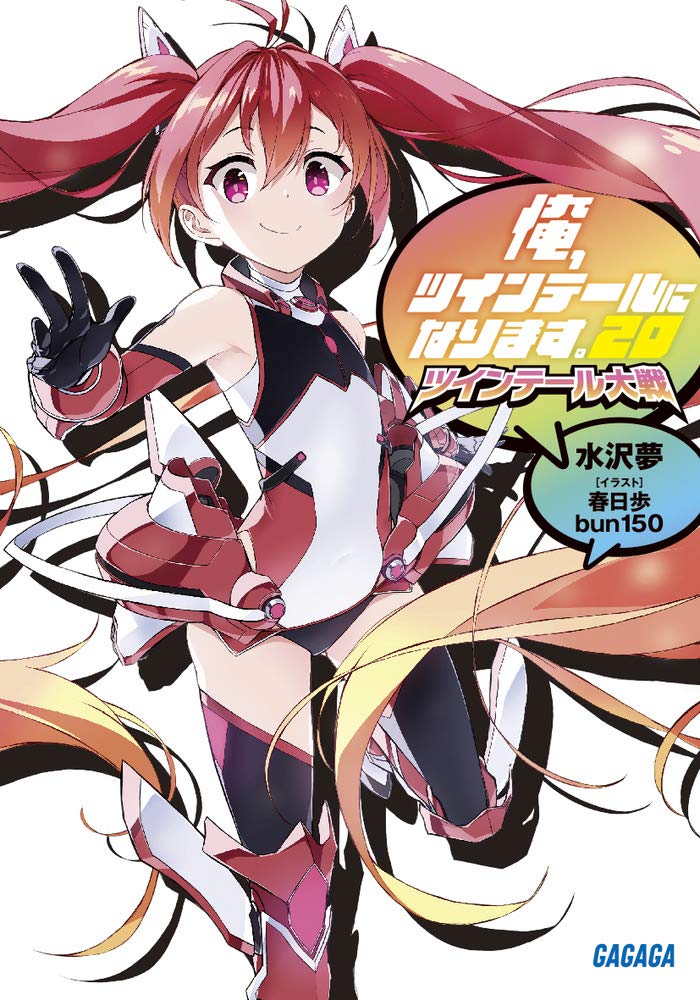 The war with the long extant Ultimaguil had been brought to a close and peace had returned to the world. With the Twintails becoming more and more of a familiar existence to the world, peaceful days come and go even with the occasional sparks of stray elemarians popping up to fight every now and then. Fully satisfied with the peace of mind they've achieved, Souji and the gang hail the everyday they have. That's why the Twintail club are getting a headstart on their plans for a summer camp.

Unfortunately, that's when an unknown elemarian born from the hatred of twintails attacks. An entirely different story from the monsters that came before to rob the brilliance in the hearts of the people, this terrible lifeform leads worlds to their ends simply by existing. What it all comes down is whether or not the Twintails are even able to fend off the formidable vengeful twintail ghost and safeguard their world from it. On top of all that, a team-up battle with warriors from another world is being filmed as a special episode too!

An after story for the twintail warriors.

A side story for the planetary magical girls.

And lastly, the beginning of the story shared between a young boy and the goddess he's made a pact with.

Heroes gather when these three worlds collide! With the end of worlds at stake, they must unite their power and their twintails to face things head on!

With a lively, bustling Twintails' flavored epilogue to see them off, the final ultimate Twintail festival raises its curtains!!

So yeah, apparently we're getting an extra thick volume and it's the post-show VS movie featuring two more sets of heroes and an extra illustrator bun150. As a toku fan, I really should have seen this coming, especially since I read Mizusawa's other series too, 4 Cour After. I did expect them to show up in some extra content while Twintails was still serializing but after it ended I figured it wasn't meant to be or they were going to show up in his JK Tokudorks doujinshi novel series which I haven't actually gotten around to yet. Hopefully this new hero Mizusawa is throwing into the action is going to be a sneak peek at a new series he has in the works but can't say I know what this one could actually be a send up to. I guessed maybe Garo at one point but that isn't exactly defined by a goddess making pacts with young boys. I'd think it's precure but after taking a peek at the illustrations I can safely rule out this being another gender bender or magical girl series since this we've got a gun-toting oneesan in white alongside what appears to be a more cocksure Shuu from Guilty Crown. Go on and get a copy to find out yourselves at amazon or bookwalker, the latter will have a preview of the color spreads so you can see for yourselves. Even if you're not curious about the new hero, there's also great rollcall spread that simply has to be seen. Chapter titles:

As much as I'd like to get on this quickly(and upload those overdue details from the last volumes) I'm afraid that this will be a fair wait for anyone popping ino this bit of news here. I'm totally booked up till Christmas and to put it succinctly, I've basically lost access to half the site, specifically DB access. Also, the site itself got mogged hard by a bot and loads up comment enabled pages terribly slowly. Don't ask how but both scenarios weren't part of the plan at any point and it makes me feel like a total Shamiauthor for letting either happen at all. Thankfully, I've actually built up a pretty damn handy codebase this past year and I can tack on the site's data onto another more robust DB I've got up for personal use so expect something a bit more interesting in the works. Hence Ragnarok shall fall upon these pages in the coming moons and I shall rebuild anew from its ashes and then ye faitful shall reap thy promised rewards.

As for the new novel itself, I'll probably get hooked into sharing the details on /a/ at some point but this will probably be the last post from me on the site in its current form so let me wish you all an advance happy new year and a hope that your 2021s will be a better year for you in spite of the soothesayers foretelling it to be another economic mess in the making. May twintails be with you all.