The newest volume will be dropping in just over a week and a half on the 18th and wouldn't you know it, it really is the endgame this time: 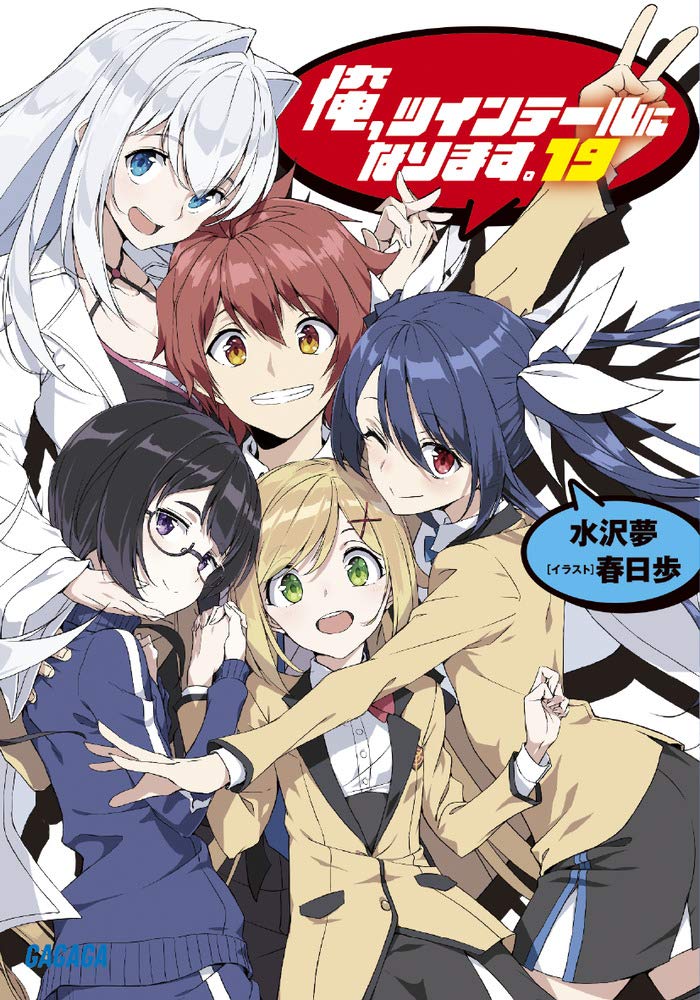 The twintails have broken into the enemy base entered a deathmatch with the all-reigning Leader of the elemarians but what awaited them at its end was Tail Red's defeat. The Leader then declared in turn that they will be launching an all out attack on Souji's world. To defeat the Leader, there's no other way but to sacrifice my own twintails - so Souji tragically resolves. Aika, Twoearle, Erina and Acena... they bundle up together with their beloved boy and swear to fight together with him to the end.

And as if it were meant as a sneer at their bond, unprecendented hordes of elemarians make their worldwide assault in one coordinated sweep. The Leader's machinations have also led to the exposure of Tail Red's true identity as that of a boy. t was Tail Red's existence that bolstered the world's love for twintails but now that the illusion has crumbled apart, that love has turned to despair. Souji must endure the pain of losing that which he protected so valiantly but can he bear it enough to continue fighting? What awaits at the end for the world's, no the universe's twintails...? That boy loved twintails and he continued to protect those twintails. And yet...

If Mizusawa hadn't tweeted that this would be the final volume of the main series, I would have suspected that it was a ruse and that there would be another volume to go after this one but alas this does seem to be it. I was even counting on the fact that Amazon didn't list it down with a final volume note anywhere to hold out hope for more but oh well. I'm sure it'll be a hell of a finale but after what went down in volume 18, I can't help but worry it's going to read like a major boss rush volume because of which elemarians are still left standing. There's certainly enough material left for an epilogue volume too but I'll be quite happy if Mizusawa goes full ham on the final fight and comes up with something as intense as Tokyo Inroaded Closed Eden. He's also recently alluded to Yuno and Tyrano Guildy's penchant for breaking TPO so I'm guessing they'll be showing up somewhere in there too and I'm most certainly hoping for one last evolution from Swan Guildy because as amazing as he was in vol 18, it still feels like he's got it in him for one more surprise. There's still a possibility he'll continue on with a side-volume or two ala OreGaIru since they're under the same label but I wouldn't count on that.

As for when I might be able to get around to putting up the remaining summaries - yeah, I can't make any promises on that front. I'm most certainly going to binge as much of the finale as I can the second it turns to midnight on the 18th but I've also got a pretty tight couple of months ahead of me work-wise. The summaries can take as long as 6 hours total to sift out for relevant details you guys might enjoy but I really doubt I'll be able to make time to get it done in one sitting without sacrificing sleep. Just keep your RSS tuned to the twintail update feed on the landing page and you'll hear about it when I've got them out or check for my trip in the archives every month or so for their dump threads. I do still need help with volumes 18 and 19 though. I have volume 17's images in decent quality somewhere but I still don't have good ones for 18. If you manage to get your hands on them for the last two volumes, please do send them my way. In any case, here's to a smashing finale and a magnificent final sentai roll call to bring down the curtains!

P.s. I'm betting that Souji gets stuck as Tail Red permanently after the final battle and that the girls aren't going to mind. Not even Aika.