There's not really much space in the afterword for times like these but... Everyone, have you taken a good a look at the wrapover banner? Please prepare yourselves for a cliched, noisy reaction pumped full of feelings.

That's right, "Ore Twintail ni Narimasu." the plan to having it adapted into an anime is going underway as we speak!

More information will be coming in official announcements through the media so look forward to what comes next!

That brings us to this volume where I aimed to have settle all accounts up till now in battle. Ponytails will be joining in as a regular affinity and a new development will start with the next volume.

Apologies and thanks to our illustrator Kasuga-san. Thank you so very much for putting your soul into those incredibly hot illustrations for this volume's very important announcement! That goes especially for the movie poster-like color spread that made me feel all pumped up like a little kid!

To my editor Hamada-san, when I look at the word "Twintail" and I think back to all the meetings, first drafts and revised drafts we went through in the 20 months it took to get as far as 5 volumes I think I can finally pay you back for all that you've done!

To Hata Kenjirou-sensei! I followed the criticisms you shared with me during the awards ceremony and now it's turning into an anime!

To everyone who had a hand in completing this time's publication... And also to everyone of you readers who've been cheering me on this far, my twintails are ever grateful!!

I'll keep on putting everything I got into twintails from here onwards as well so here's to what's coming!!

The twintail author who hails from the north(I forget to write that in sometimes). Now that we're on the fifth volume we'll see all sorts of things get settled. Please keep on following Souji and friends and their story! It's summer vacation for them in the story but it's time for me to go shovel some snow... 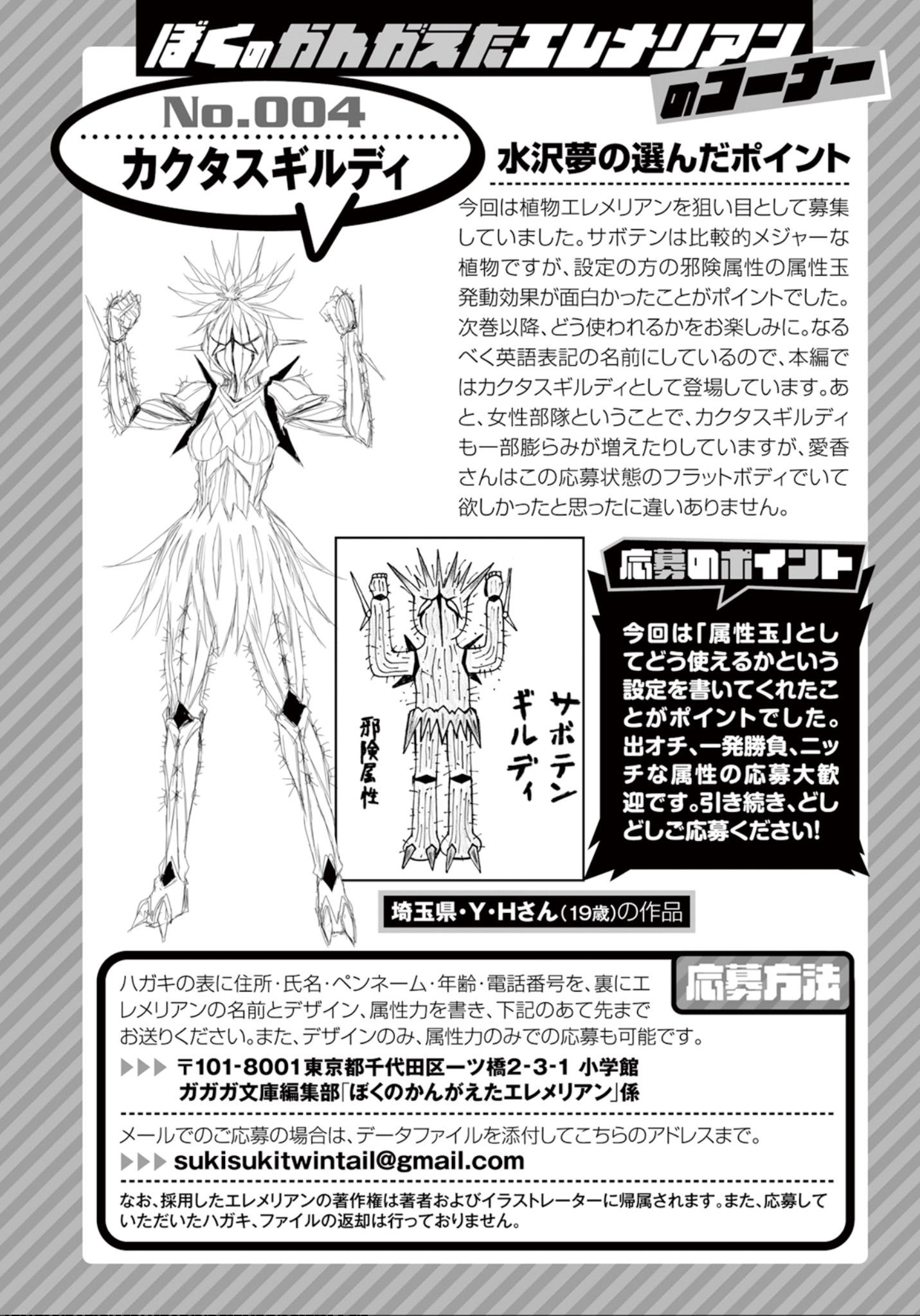 Mizusawa's highlights:
This time I was looking into recruiting plant elemarians. Referred to as Saboten in japan, it is a relatively major plant but what gets me is the amusing way that the Cruelty elemera orb takes effect according to its concept. Look forward to how it'll be used in the upcoming volumes. Of course we needed to give her an english name so that turned into the Cactus Guildy in the story. Also, since she's part of the all female unit, cactus guildy has parts of her swelling out that did see more volume in the final version but Aika-san would still have been left wanting even with the flat body seen in the sender's rendition.

Send-in highlight:
This time we highlighted the way their "elemera orb" would get used in the setting. We greatly welcome those that are of niche affinities and can settle fights as their punchlines. Please do keep on sending in what you have for us! 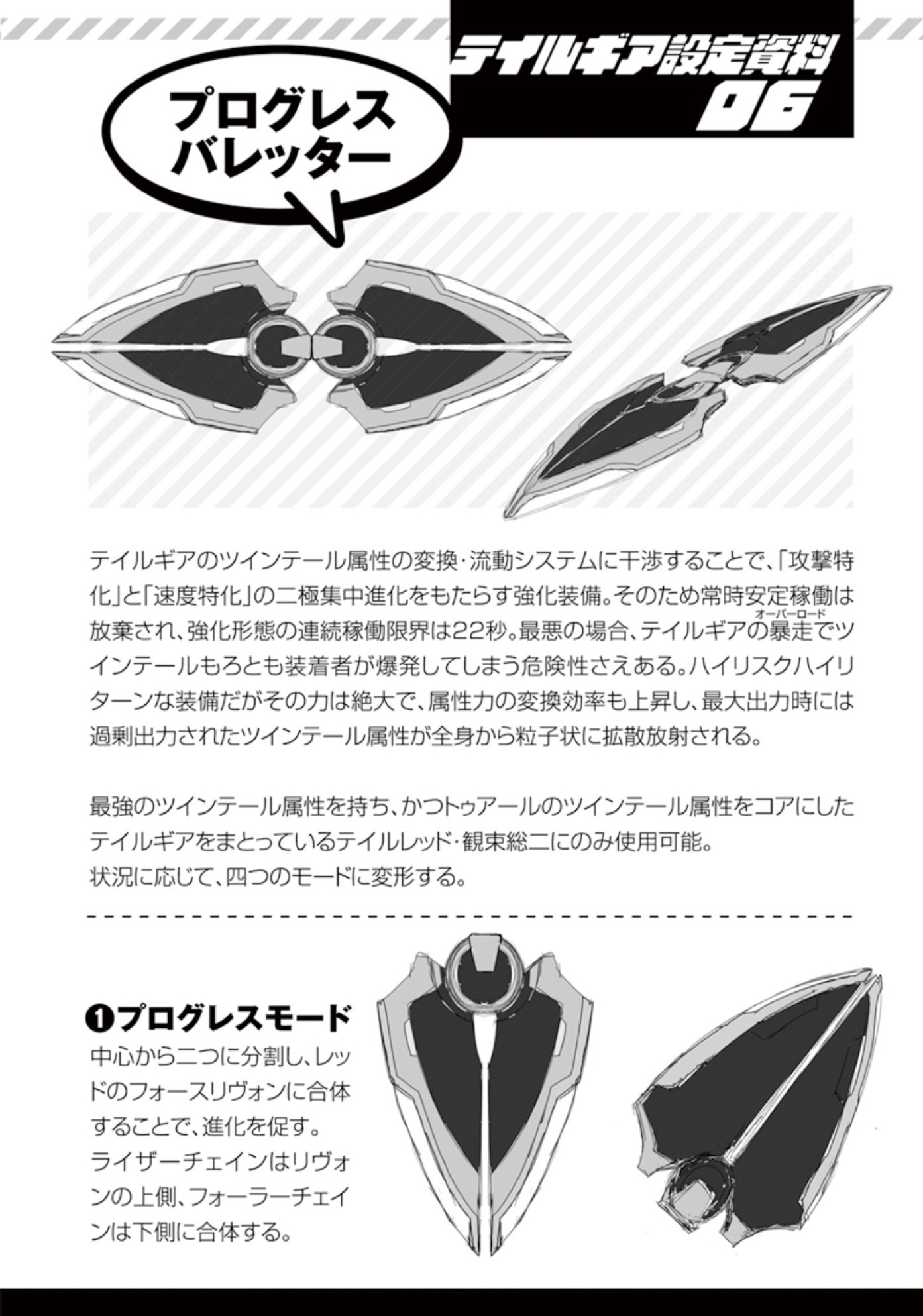 Able to interfere with the tailgear's twintail elemera conversion and flow control systems, they are power-up equipment that evolve the tailgear towards two extremes, "Attack Specialization" And "Speed Specialization". To do so, stability is thrown out the window and the active time limit for these power up forms is 22 seconds. In the worst case scenario, the tailgear will go into overload and runs the risk of having the twintails along with the equipment explode. It's a high risk high return equipment with tremendous power as its elemera conversion yield ratio climbs upwards and when it reaches maximum output the excess twintail elemera is emitted out from the whole body in particle state.

(1) Progress Mode
The can be split into two at the center and combined with the Force Rivons to trigger the evolution. They are attached at the top side of the Rivons for Riser Chain and the bottom for Faller Chain. 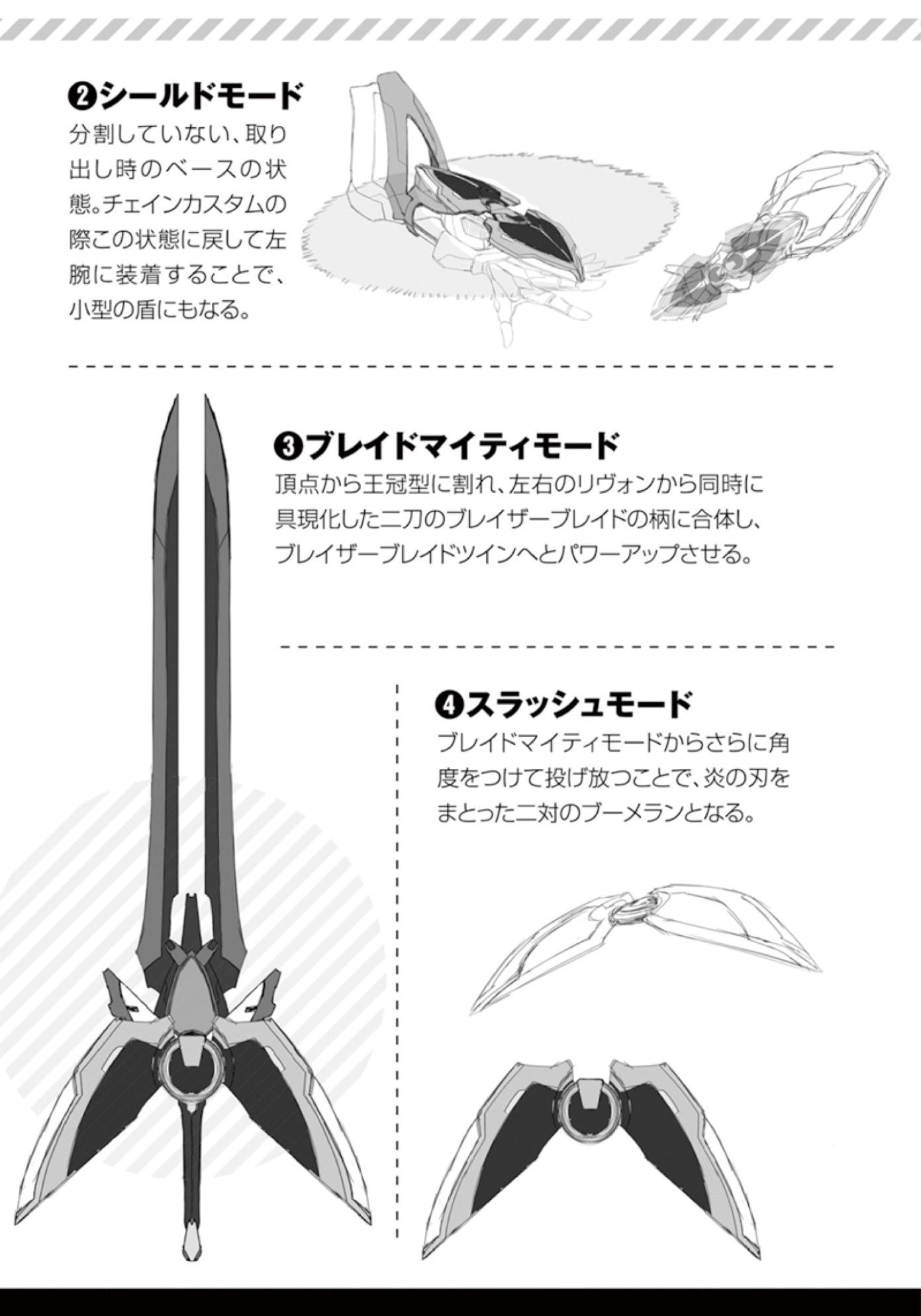 (2) Shield Mode
Intact as one piece, this is the base state that they are in when drawn out. If returned to this form in one of the Chain Custom modes, it can be equpped on the left arm as a miniature shield.

(3) Blade Mighty Mode
When split from the top like a crown, they can be combined with the two Blazer Blades materialized simultaneously from the Force Rivons to power them up to the Blazer Blade Twin. 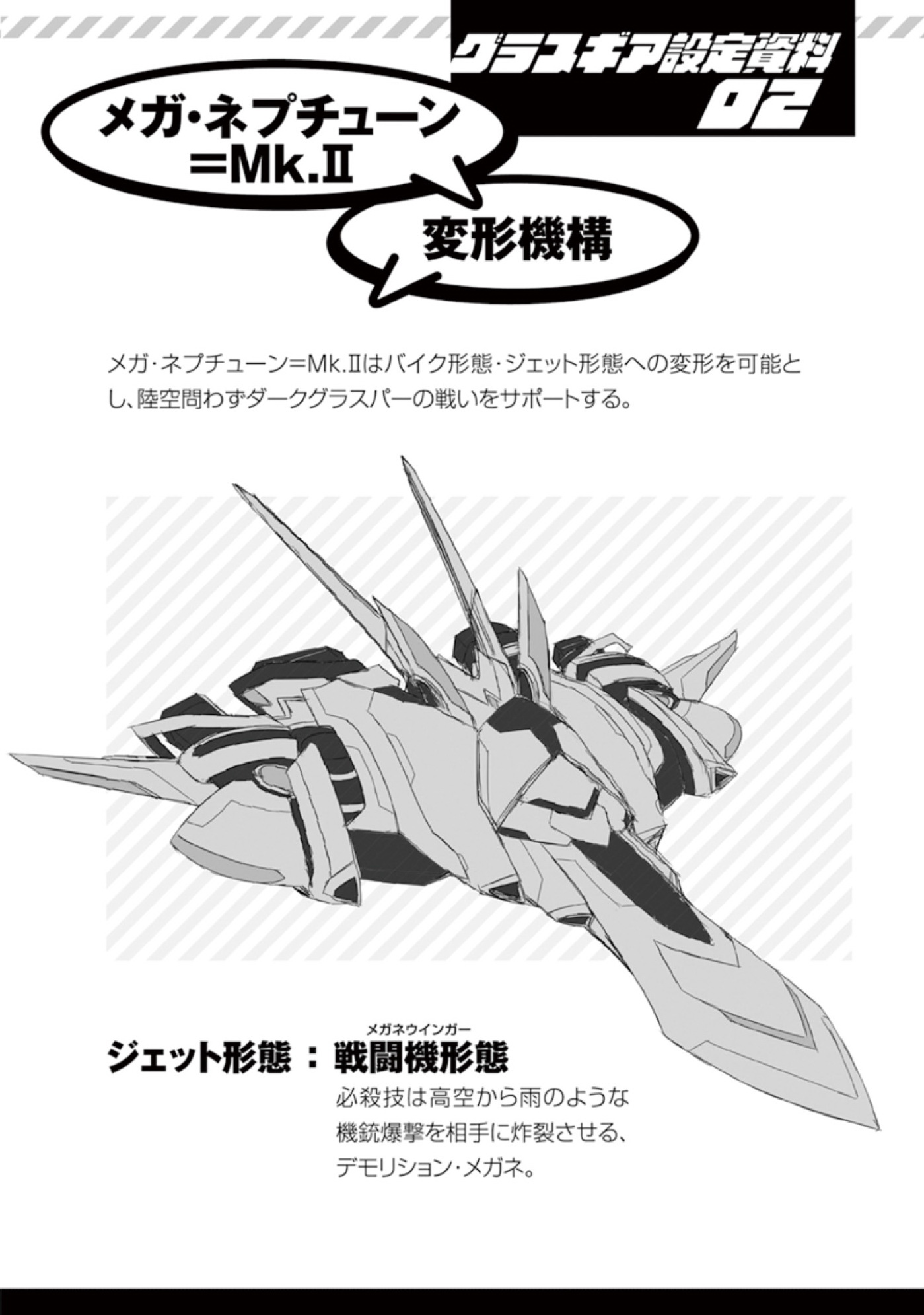 Mega Neptune Mk. II can transform into Bike and Jet modes so she's able act as support to Dark Grasper on both land and in the air.

Jet Mode: Mega Winger(Combat Vehicle Mode)
Finishing move is to rain down explosive machine gun fire on her opponent to tear them to shred. Dubbed the "Demolition Glasses". 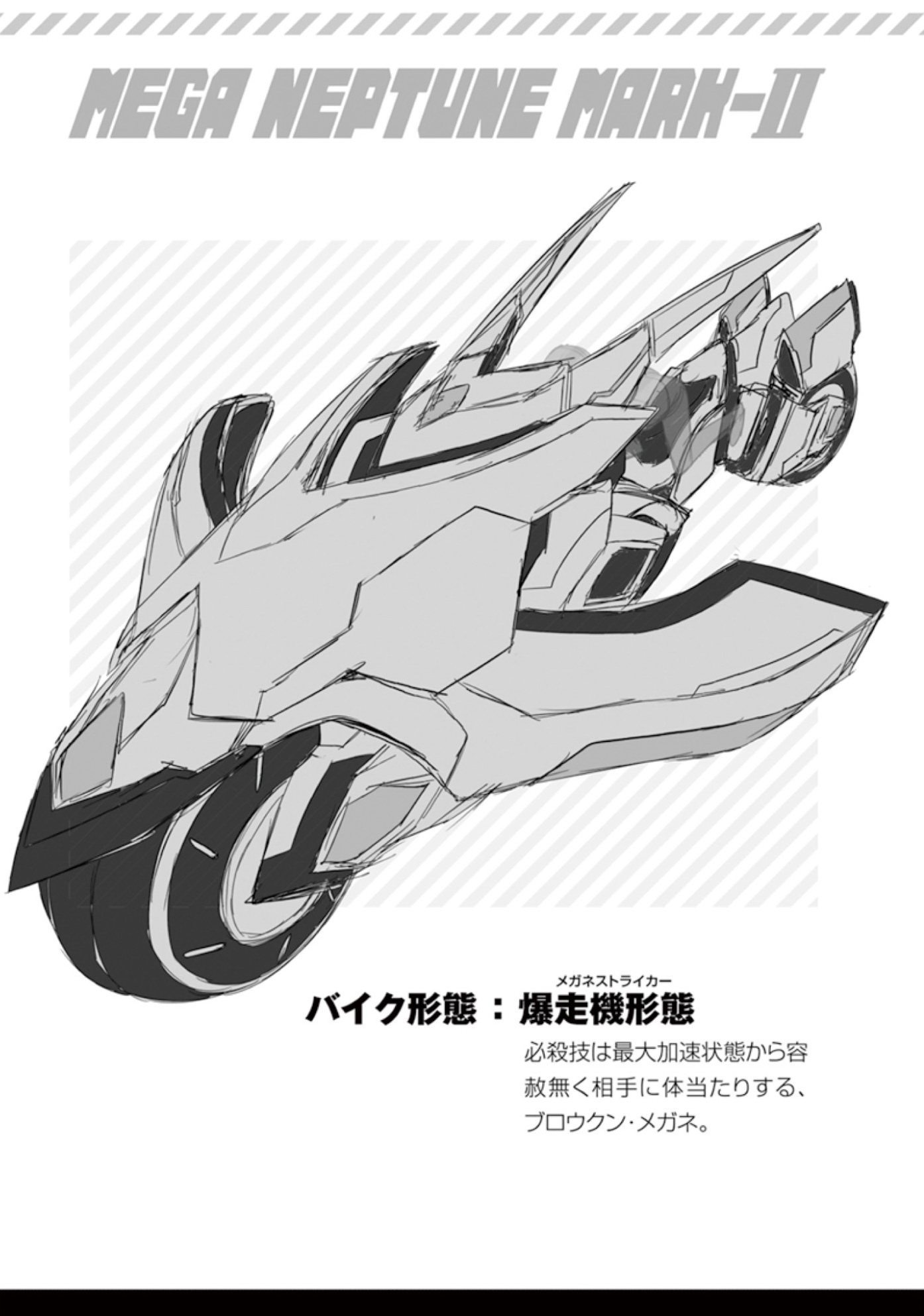