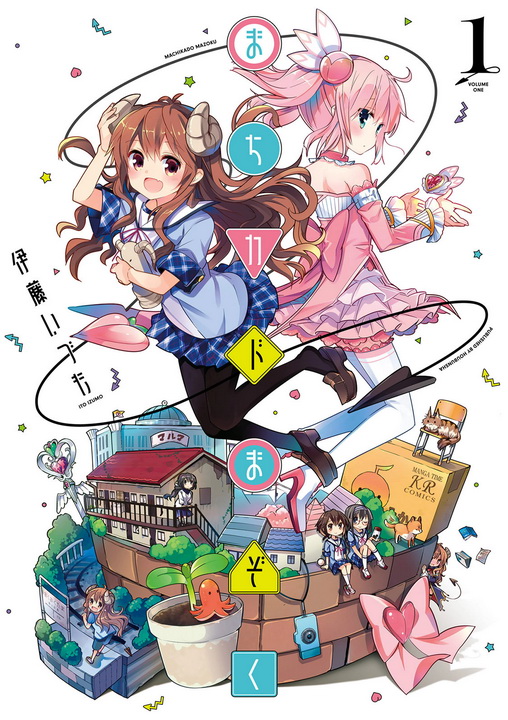 A poor young girl by the name of Yoshida Yuuko awakens one day to discover that she is in fact a street corner demon who shoulders the fate of reviving the ancient evil that is her tribe by sacrificing even her own name to overcome her town’s resident magical girl. Unfortunately for her, she is less than adequately equipped for the task and is such a pitiable thing that said musclebound magical girl actually decides to help her out by training(domesticating) her up to one day defeat her and claim her throne as Shadow Mistress Yuuko.

Next to Shoulder a Coffin Kuro, this would be my favorite Kirara manga. Like Kuro, Machikado Mazoku is 4koma series with an actual plot and charming characters to drive it forward. It starts off like any other CGDCT 4koma with episodic chapters but towards the end of the first volume a bit of a plot and a mystery starts taking root, the leads start evolving as characters and their world begins to open up – in other words, the end of volume 1 is where it starts being something special.

The first volume’s cover had me at hello when I spotted it on amazon with its cute art and composition and pleasantly surprised to see that it wasn’t going to remain complacent and stay a static comedy like most 4komas. Volume 2 would come out several months later and I came out the other of it eagerly awaiting the next installment about 11 months later. The plot didn’t quite take over the spotlight from there but the author manages to weave it into all the cute girl antics to keep a good sense of progression going for both the story and the characters. By the end of volume 4, you can almost feel proud for our dear little Shamiko as she’s actually managed to into her own as the town’s friendly neighborhood shadow mistress and she’s no longer the sole receiver of narrative bullying in the series. I really enjoyed all the Momo bullying in volume 4 by the way.

So my personal tastes for bullying cute girls aside, Machikado Mazoku is quite serviceable as far CGDCT series go. The presence of a plot and progression doesn’t mean it’s going to earn critical acclaim on those elements themselves but they are more than sufficient for this kind of story and enhance the slice of life aspect of the series greatly. It never hits dramatic high points or make you feel deeply for anyone but the story does keep you wanting to see more of their little world and you can’t help but feel happy for the characters as you watch them grow so that scores a good number of points on the plot and emotional aspects of the manga. If you manage to get hold of good copy of the series, you’ll see that the chapter to chapter art lives up to the cutesy liveliness the cover shows off. The early pages of the series is still rough round the edges in most aspects but as said before things really do pick up towards the end of the first volume.

It’s really quite a shame this series never got any attention among the scanlating community. I recall it coming in 3rd for most wanted anime adaptation in some big poll over back in its homeland but the most you’d ever see of it on this side would be the rare recommendation among raw readers. Seeing as how only the first volume ever saw the light in the sea of public raws, you can imagine my disappointment at its lack of popularity. I mean it’s understandable since I’ve had to import my own copies to keep up with it but you’d think its popularity with the locals would have pushed it further along here. I actually did mean to release the first few chapters for someone to pick up at some point way back when but never got around to it. The urge came again when the anime finally got the green light but also soon heard that Kirara Scantasia would be working on it so I just left it to them since I’m painfully aware how difficult it’d be find someone to do the very demanding redrawing efforts this series would need.

If this isn’t your first exposure to the series then you’ve probably come to know of it because of the anime adaptation. I’ve been looking forward to it getting an anime for years now and as it happens that anime is premiering today. I’m not too keen on the preview material they’ve shown so far or the studio’s recent track record but I’m still holding out for a good adaptation that’ll cover the first two volumes properly(Going up to vol 3 would really be pushing it for a single cour series). I’m sure the resident Kirara fanbase on /a/ will be picking it up for their fill of cute dorks as usual but I do worry that the production quality of the anime will hamper its overall popularity. I was genuinely dismayed that Dogakobo didn’t get the job since they really are the perfect fit for this one but I’m really hoping that JC Staff didn’t pick this to be series that’s getting the short stick out of the 5 shows they’ve got lined up this season.

Volume 5 actually came out a month ago but I haven’t gotten to importing it just yet so I don’t know how it’s turned out in the past year but going by the reviews it seems to still be going strong so I’m going to give you a strong recommendation for this as a read, doubly so if you consume CGDCT series starring cute dorks. This is effectively a recommendation for the anime at the time of publishing but if you have the means to enjoy the manga in its raw form then I really do urge you to pick up your forks and eat up this serving of the little demon girl that could. The series hasn’t let me down so far and so I’m hoping that it’ll see better days from here on out.

P.s. Here’s a challenge to keep in mind at the end if you pick up the anime – when episode 12 comes around see if you can remember what Shamiko’s actual name is without cheating and come back to this page and leave a comment if you did or didn’t.

UPDATE: I am happy to say the anime far exceeded my expectations and I'm glad for all the changes they made and all the Shaminoises they came up with. Between Shamiko and Fujiwara, I'm really hoping to hear more Kohara Konomi's wonderfully delightful voice, especially since Machikado Mazoku's anime sold so well it'd be odd not to see a second season by 2022.