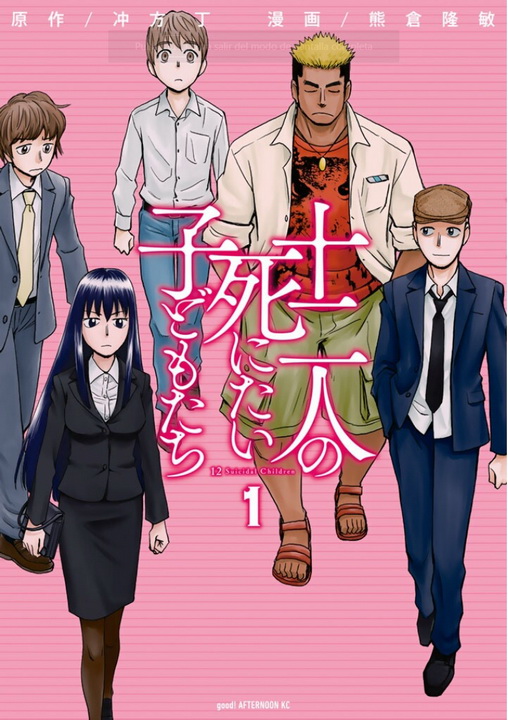 A group of 12 strangers agree to a real life meet up wherein they gather together at an abandoned hospital at a specified time outside public view and in the most hushed tones to accomplish one task – to kill themselves in a suicide pact. There’s just one problem though. There’s one too many bodies waiting at the hospital.

This foremost a mystery but rather than the whodunnit or howdunnit of the story, it was the why of the characters that had me intrigued. These twelve individuals met through an online chatroom and just decided they wanted in on offing themselves quietly in some corner of the city and they all varied in backgrounds and drives towards self-destruction, there just had to be something interesting talk about suicide in there and I was right on the money.

The story’s meat doesn’t just comprise unraveling the motivations behind their suicides or the identity of the mystery guest they have with them but also has them talking out their issues and accepting the cards they were dealt. I can’t say everyone’s personal reasons are going to prove compelling or even understandable to the readers, a couple in particular seem too ridiculous to have been intended to be taken seriously but they are all entertaining on some level. I can’t say the same for the how of the mystery guest though. I just stopped caring about the logistics behind it and skimmed over the very detailed explanations after the first volume. I don’t know if that’s more telling of me or the story but I just didn’t care about the how after the first volume and was far more interested in the why. Take note that I rated this a one on emotions so by compelling personal reasons, I meant that they proved amusing and not that I found myself empathizing them in any significant capacity.

Execution, characterization and pacing-wise, this definitely could have been done in a more palatable way but it does those well enough to keep you intrigued. Not addicted, but enough to have it on for a watch in one sitting if it were a movie. It actually would make a pretty decent flick too and at the time of writing this article I can’t be sure that it’s not actually a manga adaptation of one. Better than Murder on the Orient Express at least. There was just so much contrived with that particular Agatha Christie story that I genuinely do regret having read it. I think you’ll get at least a measure more satisfaction and catharsis out of this than I did from the resolution in Orient Express and though this does get silly with some of the twists and revelations you’re not going to feel like you wasted your time because the story tries to be too clever for its own good. (I later found out there was in fact a movie adaptation of this before posting this up so guess I think like a japanese movie producer.)

Given the subject matter I expect it might resonate with some of its readers but for me it was ultimately just a neat little piece of entertainment that I felt deserved a bit of attention. I pity the translator that dares to pick it up because I’m sure the reasonings, both logistically and psychologically, will have your head spinning but power to them for daring.  All in all, a decently unusual read that I do recommend with caution of its expositional nature. A maybe to pick up but if you’re not sure just yet about committing, perhaps sleeping on it will help.