The newest volume will be dropping in over a week's time or so and to quote a certain master of the mystic arts - we're in the endgame now: 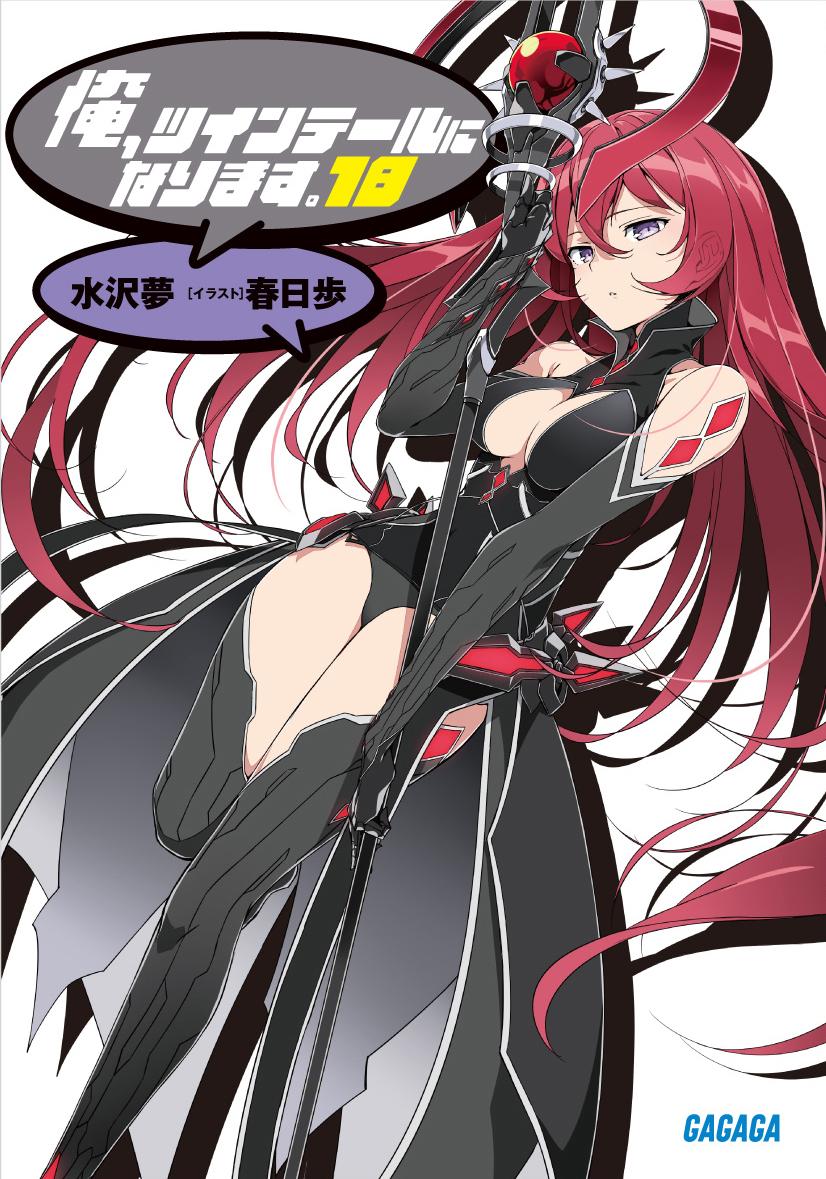 It's time for the final battle, time to charge into the Ultimaguil base!

At long last, the twintails reach the ends of their fierce battles in the form of the assembled four god elemarians. Calling themselves the "Zeroth Star of The End", they acknowledged the capabilities of the Twintails and handed them a transport gate into their the Ultimaguil base that came to conquer this world. Facing down the last line of elemarian commanders as well as the Ultimaguil leader, Souji and the gang can't even hide their anxiousness at the battle that stands before them.

Meanwhile, the elemarian remnant forces have learnt of the invitation the "Zeroth Star of The End" extended to the Twintails and have given in to terror and fallen into pandaemonium at the prospect of Tail Blue boarding their ship. Seeing the cornered figures of his comrades, their commander Swan Guildy resolves himself to a decision.

Before they charge into the enemy base, Souji suggests that they spend their days leading up having a blast so that they won't have any lingering regrets. Twoearle, Erina and Acena all go with spending time with Souji as they respectively please. Aika once again rouses herself up to make progress her relationship with Souji further. Irreverent to their wishes however, ill portents begin popping around their world one by one. Twintails draw themselves upon the surface, volcanoes erupt in their shape - all manner of omens preluding catastrophe to come have been triggered...!

The final battle is upon you, Twintails! Hold your love for twintails in your hearts for now is the time to make your charge into the enemy's base!!

As you can see for yourself, it's time for the final boss stages the guildies are finally going to face their nightmare scenario - Tail Blue knowing where they live. Iirc they've been dreading that scenario for over half the series' lifespan so I can't tell you how much I've looked forward to the shenanigans incoming. This should also be either the 3rd or 2nd last volume in the series going by the pacing. I say the former because of how many confrontations and set-ups we have left to go through and the latter due to the decision to show off the Leader's yet to be shown battle gear on the cover. A boggling decision given the eyes and how she didn't even change out of her superbly final boss-esque first form dress. I expect tricksies involved because it screams less "final boss" and more "evil female commander that's going to be rescued by the hero". Also, I was really hoping to see a full color depiction of that gloriously chuuni smugness at some point.

I thought it was a bit odd myself for them to show a yet to debut form on the cover but to my disappointment that is not in fact a brainwashed Yuno with her hair down dressed in the chuuni battle gear of the leader's design. I can only blame my reading too much into the dead eyes there as Mizusawa himself tweeted that it is indeed the Leader on the cover of the volume. I should also note that I am kicking myself for not thinking to check his twitter for a picture of the cover when I'd been waiting on amazon to update their cover of the volume so I could make this post.

I'm not sure I have any expectations for what should happen in the final stretch starting with this volume because as standard as the synopsis sounds, this author always manages to throw some fun curveballs within them and the one curveball I expect to come probably won't happen in this volume since Aika seems to be getting the focus this time. Come whatever may however I still expect to enjoy it immensely. You can expect it to go up on sale on the 18th at Amazon so head on over there(or any other source of LNs really) for your fix.

Amnesiac boy Hibiki Yuuta is "Hyper Agent" Gridman through his handy dandy Access Flash and together they spend their days fighting to protect the people from the monsters created by Shinjou Akane. It was one of those days when Yuuta and the Gridman Alliance fought and fended off Akane's provocation and the monster Mecha Ghoulgilas as Tsutsuji high held its school festival but... Yuuta finds himself waking up at Takarada Rikka's home. And as if guided by something, there he meets Gridman for the first time. Whatsmore, defeated monsters are appearing again.

The thing is though, Rikka and the rest aren't at all aware of the abnormalities that go on in their world. Shinjou Akane too is acting nothing like the her that Yuuta's come to know. Who was it that could have brought forth this world!? What fate will befall Yuuta and the gang!? This the super popular tv anime series SSSS.GRIDMAN's first official novel!

Apparently Mizusawa's been moonlighting with other novels beside his comiket exclusive novels and teamed up with Bun150 from his "4 Cour After" series again to write the first SSSS.Gridman official novel. This would explain some of the release delay with the previous volume. I have no idea how this came about or how long it's been in the works but I did happen to quite like the show but not enough to check a novelization of it. Their choice of author to write it changes everything because I know for a fact that this man can be trusted with Tokusatsu stories and yuri. I really hope he channels all that untapped yuri power he had in store for 4 Cour After into this one because I really liked what I saw of what did come through the pages. It seems like Bun150's upped his leg game too so I don't expect to be disappointed on the art either. This goes on sale the day after volume 18 does and I'm going to hazard a recommendation purely on the author's writing strengths.